Hanging Out With Ray Bradbury

HomeBlogBlogHanging Out With Ray Bradbury

Yesterday’s death of Ray Bradbury got me thinking about his time at our Writer’s Symposium By The Sea in 2001, where he so delighted the audience that his appearance is one of the most memorable in the 18 years we’ve been putting on the Symposium. Even the sound check was funny, when he started rattling off a profane limerick. I don’t remember the poem, but I do remember it involved Emily Dickenson. 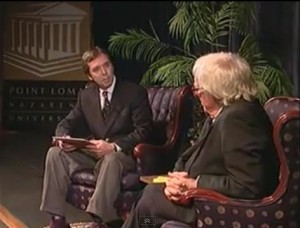 When he and I talked about how the evening event would go, he gladly agreed to an interview with me, but he insisted on giving some remarks in addition to the interview. So the Symposium began with Ray talking about life, writing, the beauty of the universe, and advice. He stood at the lectern and spoke for nearly an hour without any notes. Then he sat down and took questions from me.

I prepared for that interview the way I prepare for all of these interviews — with tons of reading. I try to read every book the author has written, and read interviews, essays, reviews — whatever else can help me ask insightful and challenging questions. One question that stands out in my memory was about a quote I saw attributed to him. I thought the quote said “I write to present the future.” I asked him about that quote and he very quickly corrected me. “I said I write to PREVENT the future,” he said. That made even more sense.

In today’s obit on Bradbury in the New York Times, they included a clip from that interview where he gives advice to writers.

My30-minute  interview with him, which aired on UCSD-TV, is here:

His speech is here.

The universe is ever grateful for Ray Bradbury for what he presented AND prevented.