This essay of mine also appeared recently on Donald Miller’s Storylineblog. com site.

Does this bother you as much as it bothers me:  A person is pushing a stroller, with the child facing the adult, and the adult is doing something on his or her phone, oblivious to the child? If the child is a baby, he or she is invariably locked 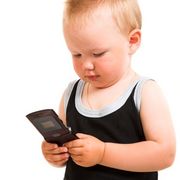 onto the face of the caregiver, looking for those cues like facial expression, sweet sounds, songs, maybe even a little monologue about what they are seeing and hearing together. That’s how babies learn stuff. We all know that.

I saw it again this morning.

I was walking back to my house after a run, and I saw the tell-tale signs from a couple of blocks away. A young lady was pushing a stroller slowly. The baby was facing her. The lady was going slowly because she had her phone out and was writing with her thumbs, pushing the stroller with the heels of her hands. My already overheated body began to boil. Welcome to Zombieville, I thought. Our phones, our status, our updates, our “Daily Me” posts have taken over. The next generation doesn’t have a chance. We will all be taken up into the sky, not because of the rapture, but because of our own weightlessness.  I so badly wanted to say something. I so badly wanted to blame her for the demise of civil society. I so badly wanted to hurl her phone into traffic, take the stroller, and say, ”I’ll watch your kid for you until you get done telling the world how awesome it is that you’re taking her for a walk in the neighborhood.”

But I didn’t. I was very sweaty, and probably a little scary looking, and lately I’ve been trying to avoid saying things that I’d regret later. So I crossed the street before we got to each other.  As we got even, though, I looked over to see one more time what was wrong with the world, and, sure enough, she had stopped. In an intersection! Typing away. Words started to form in my head. Before they got to my mouth, though, I saw what was on her screen.

It was a GPS. She was lost. She looked up at the street sign, her face brightened, and she turned purposefully, putting her phone away and picking up the pace. She seemed happy. She talked to the kid. She had figured out where she was, and she was headed home.

Have you heard the commencement speech given by novelist David Foster Wallace to Kenyon College several years ago? There’s a great Youtube video that uses excerpts from it, called This is Water. It is a brilliant speech that counsels us all to stop presuming we know what everyone’s motives are, to stop putting ourselves and our own outrage in the middle of everything so that we can maybe understand someone else’s story. I thought of that speech as I expressed gratitude for not being a jerk to that lost lady in my neighborhood.

This happened one time before, too. A couple of years ago I was speaking at a retreat for college-age students in Kansas. I was speaking on not being conformed to the world but being transformed, through the renewing of our minds. It was organized in a very cool way so that after each service when I was done speaking, the audience would go into an adjoining room where there were icons, candles, low lights, and recordings of Greek monks chanting. The purpose was to go into that room, adopt a physical posture of worship on the floor, and let the message sink in. A setting for quiet reflection and renewal.

After the last service, I entered the room with the others and sat down. In front of me was a very large young man, wearing his college football letter jacket.  The room was so quiet, so beautiful. Then the guy pulled out his phone.

“Seriously?” I thought to myself. “Did you hear nothing I said about spiritual depth? Is this really the time to be checking scores and texting?” He ignored the toxic vibe I sent his way and kept scrolling. It annoys me when college students do this during class, but dude – we’re at a retreat on the theme of not being conformed to the world.

Finally I moved a little closer to him. I wasn’t going to confront him. He could take me easily. And it was in a silent place of worship. And I was the guy who had just spoken about being transformed. But I just had to see what was so fascinating that couldn’t wait until he got back to his room.

Here’s what I saw on the screen: “Paul’s Letter to the Romans.” He was reading the text from which I had been speaking.

I heard that the PBS star Mr. Rogers carried a note in his pocket that was given to him by a social worker. The note said “There isn’t anyone you can’t love once you’ve heard their story.”

Even people on their phones.

cellphone distraction Dean Nelson judging others This is Water
By deannelson on October 17, 2013