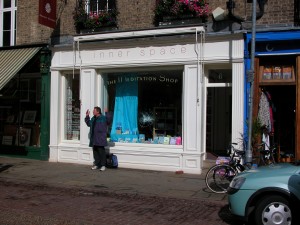 After a full day of seeing the inner chambers and halls of several different colleges associated with Cambridge University, my brain mush as a result of walking where Isaac Newton, Alfred Lord Tennyson, Francis Bacon, Ludwig Wittgenstein, C.S. Lewis, Lord Byron, Albert Einstein and others have walked and studied since the 1300s, I heard a thud that I could not identify.

I stepped into the street, just outside the main gate of King’s College, to try to see where it came from, and heard a man yelling. “They are practicing mind control,” he shrieked. I spotted him as he picked up a brick, and heaved it directly into the glass window of a place called The Meditation Center. “It’s all by remote control — they’re trying to control all of us!” The Meditation Center is located in the midst of souvenier shops and pubs. He heaved the brick again.

By now there were dozens of people gathered around, most of whom were on cell phones calling the police. While the man shouted to all of us, warning us of the danger, another man slyly walked past, picked up the brick and crossed the street. No one really engaged the man — they just didn’t antagonize him, and they took away his weapon. Not a bad policy.

In the photo, you can see the damage to the window, and the brick on the ground to the right.

Then he sat on the railing in front of King’s College and waited for the police to arrive, which they did, and they peacefully took him away.

Apparently not all meditation leads to tranquility.