My New Best Friend in Mexico 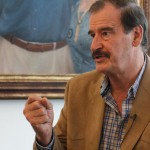 Last fall I spent three days in San Cristobal, the town where Vicente Fox, former President of Mexico, grew up. The town is in the Mexican state of Guanajuato, and is really one of the most picturesque places I’ve been in a long time. Fox invited a few of us to spend some time with him at his compound, which now houses his presidential library and leadership institute, Centro Fox. I had breakfast with him and his wife Marta in the very room where he used to have his meals as a little boy, growing up on the surrounding ranch.

Much of the ranch still exists, surrounding Centro Fox. We talked at his breakfast table, then later in his office under a portrait of him and Marta, and then we walked through the Centro Fox grounds, looking through his presidential memorabilia. Most of what we talked about is in the January 2012 edition of San Diego Magazine, in my story The Fantastic Mr. Fox.

I hope this is just the beginning of my conversations with him. He’s worth listening to. Here are some photos of Centro Fox and the nearby city of Guanajuato.

One thought on “My New Best Friend in Mexico”