So, Dad, Do You Remember World War II? Did It Remember You?

HomeBlogBlogSo, Dad, Do You Remember World War II? Did It Remember You?

This essay of mine originally appeared in the December, 2013 edition of San Diego Magazine.

When my dad enlisted in the Army at age 19 to join those who wanted to stop Hitler’s march across Europe, he didn’t get to see the big picture of his role in it. While some were sent to islands in the Pacific, or deserts in North Africa, or cities in Europe, he, a boy from Chicago, was sent to the Arctic Circle as part of a five-man station, where he and the others radioed weather reports every three hours, 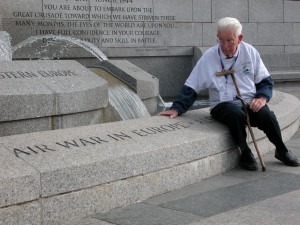 24 hours a day, for a year. That information gave the military a three-day lead time to know what the conditions would be like in Europe as they devised bombing raids.

Part of the time in the Arctic the temperature was 65 below zero (F), and it was dark 23 hours per day. Only three times did they get mail from home—it was dropped by parachute—and they couldn’t send any out. Their family and friends had no idea where they were or whether they were safe. One of the men couldn’t take it and he emotionally snapped. The soldiers sent him by dog sled 100 miles to the closest port where he could be picked up and shipped home. They traded cigarettes for ivory with the Eskimos, saw plenty of polar bears, seals, and walrus, and hoped the Army wouldn’t forget them when the war was over.

Occasionally the aurora borealis, or northern lights, would knock out their ability to transmit signals. In what seems like a scene from the movies Gravity or 2001: A Space Odyssey, they would hear a disembodied voice asking, “Has anyone heard from WXAW [the Arctic station call letters]? WXAW, come in,” and not be able to respond. For a week.

My dad did what a lot of veterans did when the war was over: he returned to Chicago and went to school on the GI Bill, started a family, bought a house with a GI Loan, and got on with his life. He didn’t have a band of brothers to hang out with. He didn’t know how his role fit into the massive mobilization of 16 million men and women who participated in that war.

My dad was one of 81 World War II veterans flown recently to visit the National World War II Memorial in Washington, D.C., the first group of veterans to visit the memorial after the partial government shutdown ended. From this vantage point he could see how the war connected the Atlantic, and all of its battle fronts, to the Pacific and all of its battle fronts. He saw the wall of Gold Stars that represented the more than 440,000 U.S. service men and women killed in those battles. He saw a granite monument for each state and U.S. territory that participated. And he saw it with veterans who represented all branches of service during those years.

The veterans and their guardians (I was one of those) who pushed their wheelchairs and helped them navigate the site were sent by Honor Flight San Diego, a nonprofit organization that periodically sends the aging veterans to Washington to see the memorial, which was built in 2004. The veterans, in their late 80s and 90s, also visited the Lincoln Memorial, Korean War Veterans Memorial, Vietnam Veterans Memorial, Arlington National Cemetery (where they watched the changing of the guard), Marine Corps War Memorial, Air Force Memorial, and the National Museum of the U.S. Navy. All in one day.

Honor Flight San Diego is one of about 130 hubs around the country that provides these experiences for veterans. Started in Ohio in 2005, the national organization has taken approximately 115,000 veterans to the memorial. The San Diego branch has taken more than 500, all free of charge to the veterans. HFSD depends on private and corporate donations, and zero government funding. My parents have been living in Point Loma for the past 13 years. When the American Legion told my dad about Honor Flight, he filled out an application, and sent it in. It was that simple.

In the evening there were banquets, where vets sat at round tables and asked each other about where they were stationed. Some saw combat, some drove trucks, some fixed engines, one survived the Pearl Harbor attack, one tapped out codes about weather. They talked about “Dear John” letters they received, soldiers they saw killed, hospitals where they recovered from wounds. There were no visible military ranks, no hierarchy, no officers, no grunts. Just vets.

Everywhere they went people thanked them. Children and adults cheered for them when they arrived at the airport in Baltimore, at the hotel, at the memorials. Strangers bent down to kiss them, thank them, salute them. Fire departments at both the Baltimore and San Diego airports gave the chartered plane a water cannon salute as it taxied toward the gate. When the vets got back to San Diego, about 48 hours after they left, it felt like the entire city turned out to welcome them home.

“I can see the big picture now,” my dad told me at the end of the day of visiting the memorials. “I can see how the pieces fit together. Before, I just did what I was told to do.”

It’s fashionable to despise anything connected to Washington, D.C., these days, with dueling political parties arguing over Obamacare, the government shutdown, and the economy. There is woefully little for the nation to rally around and celebrate. But every now and then we see the big picture. We see the monuments, both in granite and in wheelchairs. WXAW? We read you loud and clear.