Volvo in Vegas, Part II: In Search of a Sign

HomeBlogBlogVolvo in Vegas, Part II: In Search of a Sign

Even if I were an atheist, I think I would believe in God after that, just because it seemed like the universe was putting such an exclamation point on our predicament.

The tow truck showed up and drove us 60 miles to Las Vegas, to a repair shop that the driver said was good. This was a Saturday afternoon, so the shop was closed and the lot was empty. After handing over several hundred dollars to the driver, I left Blake and his belongings with the Volvo, as the tow truck driver took me to the airport where I could rent something else. We thought we could still make the show. We’d figure out what we were going to do with the car later that night, we decided. First things first – get to the Bellagio. Soon I was in a car headed back to Blake. He had found the one spot of shade in the mechanic’s parking lot – about a two-foot triangle. Temperature was 110.

This time we weren’t so careful packing the rental car. It was a little bigger than the Volvo, so the bike fit inside. We were dehydrated, hungry and hurrying.

When our kids were little, if there was a glitch in the plan, my wife and I tried 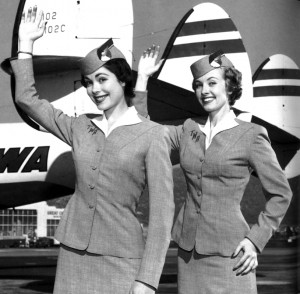 to keep everyone’s spirits up. Parents go into flight attendant mode – mostly cheerful and helpful, keeping the harmful information from the passengers (Of course we’re not going to crash! Of course there is plenty of oxygen. Of course we anticipated that turbulence! Would you like some more peanuts?). When a different Volvo broke down on the way to Disneyland years ago for our daughter’s birthday, an observer would have thought this was all part of the fun. Look! We get to rent this cool car for the day! My wife and I did that for years – trying to put on a good exterior while stomach acid poured into our internal organs. I was under no such pressure this time. Blake had traveled plenty through South America, Africa, Central America, where buses broke down in heat that was worse than this. Things fall apart, Achebe said. Good plans don’t always work out. Adapt or die.

I left a note and the key for the mechanic, and took a long look at the Volvo. This may be its resting place, I thought. Even if the mechanic got it running again (what was my threshold for spending on that car? Didn’t I just surpass it a couple of weeks ago getting it ready for this trip?), how would it make the trip back through the desert to San Diego?

I had to admit, I felt a little smug when we started out this morning. Sure, it was an old car with 250,000 miles on it. But it was paid for, solid, and had the San Diego mechanic’s blessing. It would serve Blake for many more years. And then this. It couldn’t even get out of California.

“Say goodbye to your car,” I told Blake, with embarrassment in my voice. “I’m really sorry you can’t have it.” It was almost like putting the dog down.

We pulled our packed rental onto the street and headed for the strip. It took

almost an hour to go the final few blocks, but we got to the hotel and Blake’s countenance changed when he recognized parts of it from Oceans 11. Movie references always bring him joy. When he was a teenager we spent an entire rainy day in New York finding obscure sites where scenes from the Godfather were shot. Now he was in Vegas. To him it was Comic-Con, only bigger.

We bought several bottles of water at the theater at $4.50 a piece (ever tried to find a water fountain in one of these throat-seizing casinos?) and got seated with 15 minutes to spare. 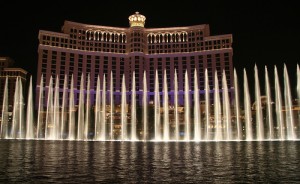 do – stay for a couple of days and hope the car gets fixed? What if, after a couple of days, we find out it can’t be fixed? Then we’d be in the same spot, only further behind schedule. Or, should we stick to our plan of driving to Denver the next day in the rental, and just hope we could figure out what to do with the Volvo?

We searched the street in front of us for a sign – something among the show girls, the star troopers, the transvestites, the obese tourists, the little men snapping their cards advertising the strip clubs, the women trying to look younger, the girls trying to look older, and the guys trying not to stare – for what to do.

Where was the pooping toddler when we needed her?