“When You Focus on the Things That Can Make You Crash, You’ll Crash”

HomeBlogBlog“When You Focus on the Things That Can Make You Crash, You’ll Crash”

To put it simply, I guess I lost my focus.

I was already a little anxious when the day began. A few of us were in British Columbia at a friend’s house, doing 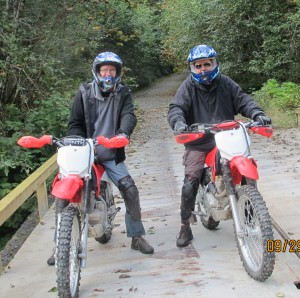 stuff that I figured should be in Outside Magazine, or maybe a deodorant or adult beverage commercial. One day we were in rubberized suits, with fins on our feet, fly fishing in a mountain lake, pulling out trout by the dozen. An otter swam next to me with its own catch of the day. Then we were boating and hiking through areas that looked like they were backdrops for a National Geographic special. Another day we were on mountain bicycles. In the rain.

On this day, though, we were headed up some abandoned logging paths on trail bikes, which are motorcycles designed to tackle steep inclines and rugged terrain. My friend Doug had a hoist that could swing the bikes from the dock to his boat. We motored through some spectacular lakes for about an hour and came to a dock that looked like it had not been visited in decades. We swung the bikes onto that dock. I looked up at the mountain in front of me.

It had been a long time since I had been on a motorcycle. I rode my friend’s enormous Harley in Kansas near his house in the country a few years ago. Those roads were straight and flat. I got a few bugs in my face, but that was all the damage. These trail bikes were for sprints, for evasive action around boulders and landslides and fallen trees and piles of fresh bear scat, which we saw. They had to be fast enough to cross deep, glacier-fed rivers and powerful enough to then climb the bank out of the river. In football parlance, the Harley was a lineman, and the trail bike was a free safety.

Doug gave us some advice as we were putting on our elbow, knee and head armor. The first bit seemed counter-intuitive.

“When you’re headed downhill toward a river, speed up, don’t slow down,” he said. “You have to have enough momentum to get through the water and back up the other side.” When I thought about it, it made sense. The water was coming from snow and ice, just a little ways up the mountain. Cold. You didn’t want to fall backward into that.

It was his other advice that I should have heeded more closely.

“When you have to avoid something, or go through something, or have to turn quickly, or have a narrow path between the mountain on one side, and the cliff on the other, don’t look at where you are – look at where you want to go,” he said. “If you focus on the things that can make you crash, then you will crash. I’ll be on up ahead of you. Keep your eyes on me.”

The first half-hour or so was great. Trails weren’t too rough. We had to squeeze the bikes between a couple of boulders that had come down and blocked most of the path. Some of the climbs were steep, even causing an occasional wheelie, but do-able. And then I hit some loose dirt and the back wheel went out from under me. I must have hit the front brake instead of the rear, and the bike spun in a hard circle, launching me several feet into the rocks.  My friend Dee came up the trail behind me. He retrieved my shoes and helped me get back on the bike. It wasn’t as if you could just leave it there and quit.

I crashed three more times that day, all of them painful, and here’s what I learned: Doug was right. If I focused on where I was, on how dangerous my situation was in that moment, on all of the things that could go wrong, on the fact that a similar condition caused me trouble before, I wiped out. I lost my nerve. I had no confidence. I was afraid.

When I kept my eyes on Doug, even just a glimpse of his back, I stayed on course. At one particularly perilous point, he had me get on the back of his motorcycle with him, leaving my bike behind. I felt a little foolish, but mostly grateful. Later in the day we circled back to the same trail, where I stiffly got back on my own bike. I crashed just one more time on the way to the boat.

And speaking of counter-intuitive, I noticed that when I focused on where I wanted to be, rather than on where I was, it made where I was in that moment even better. Keeping an eye ahead of me increased my pleasure of the present. It was my Zen and the Art of Motorcycle Maintenance moment.

The swelling is down and my confidence is returning. I’m not ready to get back on the trail yet, but when I am, I’ll at least know where to look.