I Don’t Understand Creole, But I Understood This

HomeBlogBlogI Don’t Understand Creole, But I Understood This

This essay of mine appeared recently on Donald Miller’s Storyline Blog.

It was a voice out of the wilderness.

I was on a path in the mountains in Haiti recently, walking next to a waterfall as the sun was going down. There was just enough light to get some photos, so I hurried to get a good vantage point.

I saw a smaller path that looked like it could get me even closer to the falls, so I took it, heading further into the trees and underbrush.

Just before I got to the falls I heard dogs.

At first it was only barking, but then it became snarling, with a vicious sleep-apnea kind of inhaling. They weren’t big dogs, but they weren’t crushable Yorkies, either. I saw enough of their teeth and saliva to know they could do some damage.

I said “Go home” in a stern voice.

I figured they understood the intent, if not the language.

They stopped, but it was clear they were planning their next move.

They were barking, circling, snarling, and baring their teeth. Just when I conceded that at least one of them was going to sink its canines into my leg, I heard some shouting behind them.

A girl—I estimate her to be around 12 years old also came charging out of the woods and apparently told the dogs what I had told them, only in Creole, not English. They obeyed her, and slunk away.

I thanked the girl, pointed to my camera, then to the falls, and tried to mime that I was there to take some photos. Another girl appeared – I assume they are sisters. They simply stared at me. So I went to the falls, got some great photos, and saw that the girls had followed me. I made my way past them, said “Merci,” and headed back toward the main path.

After a few steps I heard English.

Then they pointed at themselves.

I gladly took a photo of them, then showed it to them on the display. They smiled. Once again I said thank you and goodbye, and headed off. But they said it again.

They motioned to themselves again, and then pointed at purple wildflowers growing nearby. They picked some flowers, posed, and pointed at my camera again. So I took the photo, and showed them. They seemed very pleased. 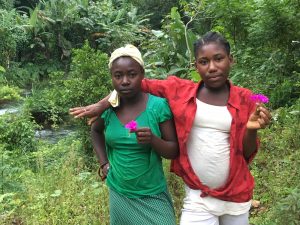 Before I could walk away, they said it one more time.

“You.” And they pointed to all three of us. A selfie!

They were VERY happy with that photo.

It’s amazing what can happen when we give up our fear and instead practice curiosity.

I thought I was alone in the looming darkness.

Then I thought I was in danger. Then a voice calmed the trouble. Then the voice spoke to me: “You.”

My guess is that there is a voice – a Voice? – that is calling you, too, today, summoning you to see what else is around you, the beauty you overlooked. Maybe the voice will quiet the snarling around you today, and beckon you.

Let’s all get in the frame together, it says. I am always with you, it says.

2 thoughts on “I Don’t Understand Creole, But I Understood This”