Physics and the Body of Christ

HomeBlogBlogPhysics and the Body of Christ 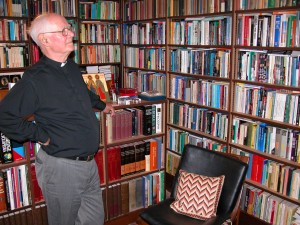 At the Good Shepherd Church of Cambridge, England, this morning, John Polkinghorne told the congregation that we’d be celebrating the Eucharist a little differently because of the swine flu epidemic. Instead of sharing the common cup, he would dip the wafer in the wine and place it in our hands.

At age 79, Polkinghorne is still administering the Body and Blood of Christ, still preaching, still talking science. He’s credited with changing the face of science and religion around the world through both his involvement in the discovery of the quark (the smallest known particle) and his other vocation of being a parish priest in the Anglican Church. He’s been knighted by the Queen, been inducted in the Royal Society, and is a Templeton Prize winner. In physics, it doesn’t get any more significant than John Polkinghorne.

So when he dipped the wafer in the cup, and placed the crimson-stained wafer in my hand as I knelt at the altar, I believed there was something truly transcendent at work. When a guy who has discovered an unseen reality says “This is the Body and Blood of Christ,” I’m going to give him the benefit of the doubt.

I’m in England to spend a couple of weeks with Sir John, working on a book that I hope will shed a helpful light on the faith/science debate. With him as my guide, I’m hopeful that readers will see the compatibility of the beauty of the universe with a creative and redemptive God.

In my book God Hides in Plain Sight (see other references on this site), due out from Brazos Press in September, I devote a chapter to how we can see Eucharistic moments in everyday life — perhaps in an average meal around a kitchen table. Sometimes they are obvious, sometimes only the attentive can see them. Today, though, the Presence of God could not have been more clear. Swine flu or not, Someone was there.

2 thoughts on “Physics and the Body of Christ”