Remembering Eugene Peterson, Who Gave Me My Most Public Smackdown

HomeBlogBlogRemembering Eugene Peterson, Who Gave Me My Most Public Smackdown

I talked to Eugene Peterson on the phone earlier this year, inviting him to an event I was trying to organize in San Diego. I asked him if he’d be willing to come. 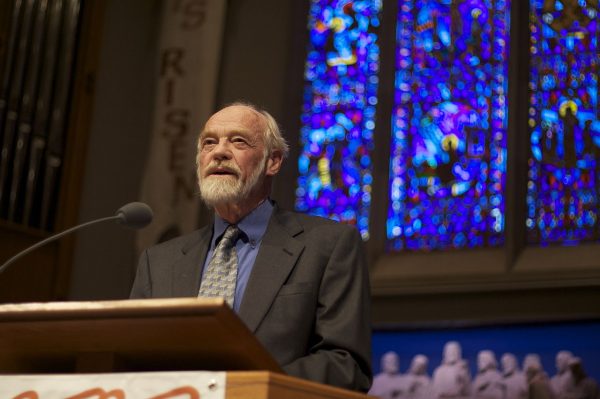 “No,” he said. “I’m not traveling any more. Give everyone my love.”

He said no too quickly, in my view. I asked if he remembered being on our campus where I interviewed him in 2007 at the Writer’s Symposium By The Sea.

Still not convinced, I pressed it a little further.

“Do you remember your public smackdown of me in front of that audience?” I asked.

“I remember it was about Isaiah,” he said.

You have to see the interview to appreciate how quick on the trigger he was when I was needling him about not traveling with Bono and U2 when he had the chance. The interview is here.

You can’t miss it.

When Fuller Seminary did a short film about Peterson and Bono and their love for the Psalms, the filmmakers couldn’t resist using that great smackdown clip. Here’s their video. My exchange is within the first two minutes.

While Peterson was on our campus, I did a lengthy interview with him for Relevant magazine, too. You can see that here.  What I found most remarkable about the magazine interview was what he said about Mystery and Imagination. “We hate Mystery,” he said. “We’re enamored with knowledge.” As for Imagination, he said “Imagination takes us beyond ourselves. There’s not enough of that happening today. I wish the Christian community would honor and commission the poets, musicians, writers, filmmakers, journalists and other masters of imagination as much as it does its preachers and missionaries.”

Traveling mercies to you, Rev. Peterson. Tell Isaiah hello for me.

3 thoughts on “Remembering Eugene Peterson, Who Gave Me My Most Public Smackdown”