The Kids Are All Right

HomeBlogBlogThe Kids Are All Right

No, this isn’t a movie review. It’s my sentiment after my wife, daughter and I visited our son and his new wife Amy in their own habitat in 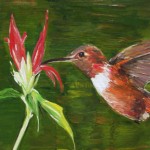 Guatemala over Christmas. Blake and Amy got married in July in Kansas City, honeymooned for a few days, and returned to Central America to teach. They had taught at separate schools in Honduras a year ago, but found this school in Xela, Guatemala, more to their liking for this year. I wrote about their (and our) Honduras experience — the beauty, the heat, the mugging, the cow’s head that we had to recover, in the Literary Journal called The Hummingbird Review, started by the brilliant writer Luis Alberto Urrea and his equally brilliant friends. You can read that story here.

Christmas in Guatemala was spectacular. We hiked a volcano that had erupted just months prior — it was like walking on the moon, only the landscape was black. Across a valley we could see another volcano erupt every two hours. On Christmas eve we went to mass at the main church by the central park, crammed in with thousands of others. After mass we celebrated the birth of Jesus and the lack of fireworks laws for about three hours by shooting every conceivable rocket, cracker, mini-b0mb — you name it. Felt like Christmas in Baghdad.

What impressed me about the experience is that the kids did all the planning and thinking to make this successful. They’re in a different country, nothing is easy, they’re making very little money, and they’re figuring it all out. They planned so far ahead that we were able to bring a lot of ingredients down for Christmas dinner. With one exception. Who knew that you couldn’t have an unopened can of yams in your carry-on bag? Not sure about their flammability, but the dour TSA agent apologized as she tossed the can in the trash. I considered saying “Don’t touch my yams,” but even I can dial it back.

We got to see where they worked, ate, shopped, slept, got taxis, did laundry, bought water (nope — you can’t drink it from the tap), met friends, got money, made their lives as adults. My wife and I almost never acted like parents, because we were too dependent on them for everything. They had to interpret the world for us. Sometimes their best answer was “I don’t know.” Interesting role reversal.

I had one parental moment where, on a volcano, I began calculating how much daylight we had left. It was a difficult climb up, and I couldn’t even see the kids, who were exploring a cave beyond another ridge. We had originally taken a different path up this volcano, but were encouraged to go back by some locals, who told us that the path we were on was only used for making sacrifices to the devil. This was a better path, but apparently I still had a little sense of peril in the back of my mind.

When the sun started going behind the peak, I knew we didn’t have loads of time to get down the path. We didn’t have flashlights or headlamps. It would be tricky in the dark.

“Come on back,” I yelled to no one. Long silence. This went on for about 20 minutes. Call and no response.

Eventually they appeared from another part of the volcano and we headed back down. We had plenty of time. I was wrong. Apparently my Eagle Scout training was good only in North America.

Actually, I’m not worried at all.

2 thoughts on “The Kids Are All Right”